Editorial-When scientists fail at science: why low-dose radiation exposure is not to be feared

The following op-ed was rejected by a popular physics journal and seven of the country’s leading newspapers, including The New York Times, Wall Street Journal, USA Today, Washington Post, and LA Times. It is at least as important to know that the mass media, with the notable exception of our own Green Valley News, generally refuse to acknowledge that, for the better part of a century, the science of radiation biology has been corrupted by special interests, such as self-perpetuating regulatory agencies and certain radiologists whose reputation rests on being harbingers of doom and protectors of the populace. This has caused untold harm to hundreds of thousands of people, who have suffered from unwarranted forced evacuations near nuclear power plant accidents and fear-driven refusal to have necessary and potentially life-saving X-rays and CT scans.

A lot of research has been undertaken on the effects of low-level radiation. The findings have failed to support the so-called linear no-threshold (LNT) hypothesis. This theory assumes that the demonstrated relationships between radiation dose and adverse effects at high levels of exposure also applies to low levels and provides the (deliberately conservative) basis of occupational health and other radiation protection standards.”

“Increasing evidence suggests that there may be a threshold between 100 and 700 mSv below which no harmful effects of radiation occur. However, this is not yet accepted by national or international radiation protection bodies as sufficiently well-proven to be taken into official standards. However, at low levels of exposure, the body’s natural mechanisms do repair radiation and other damage to cells soon after it occurs, and some adaptive response is stimulated which protects cells and tissues, as with exposure to other external agents at low levels. The ICRP recommends that the LNT model should be assumed for the purpose of optimising radiation protection practices, but that it should not be used for estimating the health effects of exposures to small radiation doses received by large numbers of people over long periods of time.”

“In addition, there is evidence of beneficial effect from low-level radiation (up to about 10 mSv/yr). This ‘radiation hormesis’ may be due to an adaptive response by the body’s cells, the same as that with other toxins at low doses. In the case of carcinogens such as ionizing radiation, the beneficial effect is seen both in lower incidence of cancer and in resistance to the effects of higher doses. This potential hormetic effect is most clearly evident in the data (see Appendix) for over 50,000 survivors of the Hiroshima bomb 1.5 to 3 km from the hypocenter, with dose range 1 to 100 mSv, compared with a large control group.”

A Sane and Sober Look at the USS Reagan Radiation Contamination Incident.

“The proposition that the USS Reagan crew were contaminated with significant doses of radiation is not credible. Suggestions that the US Navy is somehow hiding something because the ship was not brought back to a US port are equally so. The idea that the crew of the ship are suffering radiation related injury or cancer caused by Fukushima fallout is fantasy. It is just not possible based on what science knows.”

Boulder, Montana N 46.271749 / W 112.154152 Visitors to this former uranium mine pay to sit in lounge chairs 85 feet belowground and breathe the radon gas seeping from the tunnel’s rock walls. The facility, founded in 1952, is one of four radon-therapy sites in the U.S., all in Montana. 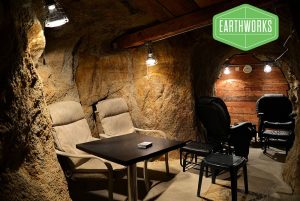